Everyone has gone off on the morning bear watching safari. I’ve decided I need time to myself.

Shane hasn’t been sleeping well so last night I gave him a temazepam and it knocked him out beautifully. Unfortunately he also snored like a trooper and I didn’t get a wink!! In the end I took my bedding down to the lounge and slept on the couch!!

But this morning I just want some space, peace and quiet. So I’m catching up on writing and will do some yoga later. It’s still raining so a nice day for resting up.

This Lodge is owned and operated by a great Aussie woman, Marg, who really followed her dreams, giving up a good job in IT to come and do this. She is in partnership with a local guy, Tom, who we haven’t met yet. Brave girl and I think they’ve done an awesome job.

A few hours have drifted by! I’ve read my book, done some yoga and showered, made an entry in the guest book and am expecting the troops back any minute. Lunch smells amazing. The chef, Julie, is spoiling us again. The day is now misty overcast with that moody, ethereal feel that makes one believe in the fey! There’s not a breath of wind. I’ve taken some photos of the reflections on the water. I hoped to see an otter while I sat imbibing the spiritual goodwill of the bush. None obliged, however. 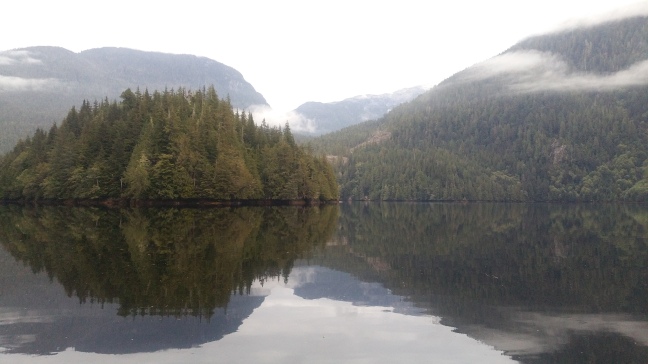 I hope the bears came out to feed, for the watchers. They’re quite entertaining. Sometimes it looks as though a bear is simply so full they can’t really be bothered putting in the effort to catch another salmon. Others just look pretty useless fishermen! They like to dig for roe as it’s so full of fat and goodness for them. Ditto the skin and belly of female fish still to spawn. We saw an old, injured male eating the dead and dying salmon that had already spawned. Other bears ignored those. Marcus and Sarah said it was a risky habit as those fish are less nourishing and full of parasites.

Well, we’ve had a fabulous afternoon. The morning watch enjoyed their stint at the hide. After another sterling meal we headed off in the boats. Don’t ask me why but my subconscious did a dive into the past and I got a bit twitchy about going. The thought of tipping overboard in a hundred layers of clothing freaked me out. I dug my toes in and refused to wear all the over gear. Just took my gortex raincoat and put another over my lap. It felt fine and I was warm enough. Once I was in the dingy I was totally comfortable. It was just the idea of tipping in fully clothed.

The first item on the list was a Humpback whale. It was cruising right into our part of the inlet. Marcus was skippering our dingy and was a wealth of information. Another walking encyclopaedia, like Fan in Africa.

Then we putted round the bays checking out waterfalls and bays. There are a lot of Bald Eagles, which is spectacular. Also spotted a young bear in a beautiful corner of the inlet, doing its going, and pretty curious about us. Marcus said he’d like a wee cabin there, and I could second that notion.

He’s an adorable young man, reminds me of my boys and I enjoyed having him around. I’m missing you, Matt and Danny!! You’d love this so much!! Actually, all the staff have been wonderful and made our time here very special. I’m going to leave a card for then, so I hope I remember everyone’s names when I write in it!! 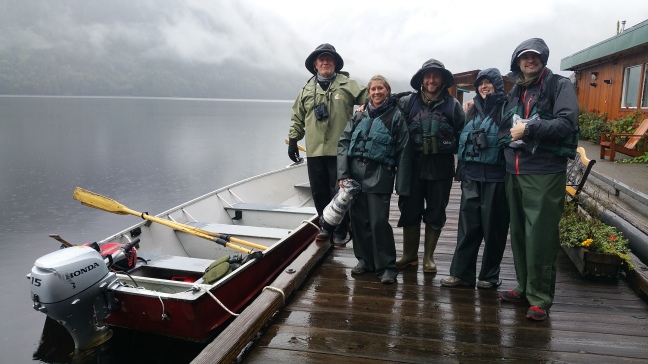