Yesterday was a travel day, with an early start to catch the 0730 flight from Port Hardy to Vancouver. We were in a wee beechcraft with one seat either side of the aisle, and one had to bend over to move along!! Cute plane though. Then a transfer to the international departures where we checked in for our flight to Anchorage. I did think a boarding pass that said Vancouver to Anchorage was up there amongst the coolest!!

We did security and found ourselves on American soil, in Canada, so to speak. An unusual set up but certainly made things easy at this end. Once in Anchorage we just got off, got our bags and grabbed a cab. No customs. Before leaving though,  I took advantage of the great WiFi access to post my blogs!

We flew Canadian Airways which is an Air New Zealand partner. Shane had put us in premium economy which should have been nice (and I wasn’t bothered!) but it turned out the only difference was a little more leg room!! No food, a huge disappointment for the labrador, no ear phones unless you bought them, no alcohol, possibly just as well and no pillows or blankets. On the plus side there was an empty row in front of us which I dived into as soon as we got airborne. So we got some sleep!!

It was overcast and threatening to drizzle on arrival at Anchorage. The promised shuttle to our hotel didn’t eventuate and when Shane rang the number he’d  been given it went to an answer phone. So we got a taxi. OMG the Inlet Tower Hotel. Where do I start? The taxi drivers reaction should’ve warned us. He said the best thing about it was it survived the 1964 earthquake, which was possibly a shame after all.

While the staff were lovely, Shane’s hackles are on high alert before we even got to the room, as fellow guests looked like they’d crawled out of a wild Alaska doco. The sight of lumpy beds and drugs on the bathroom floor didn’t further our confidence that this was where we should be!!

As the ire level rose, Shane’s agent should expect emasculation on his return, I didn’t even unzip my bag. Shane vanished back downstairs and I looked up hotels in Anchorage on Trip Advisor!! He came back with the name of the same hotel I came up with on TA. I must say that the staff at that awful place were adorable young people who helped every way they could, even organising a free transfer to the Captain Cook Hotel. This place is much more the thing!!

The evening was spent in an exhausted state of collapse, amid in room service food and drink!! The weather cleared to give us a glorious sunset across the bay. 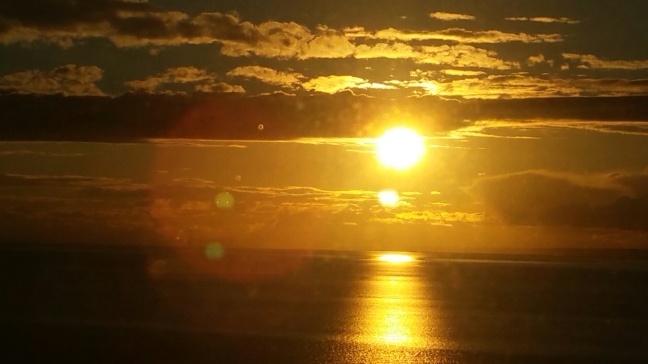 This morning we’ve woken to a beautiful view of snowy mountains across the sea.

Today will be relaxed, as it’s been pretty full on so far. Plus laundry to be done!!