Yesterday was magnificent. Again. We’ve been so lucky with the weather. Apparently it’s unseasonably clear and sunny.

I paid for my sins somewhat during the morning, not with standing I’m full of a head cold, dammit. Had a ton of fun with a very nice guy from Arizona, Jason, who was on his own too. He’s here with his mum and aunt so we exchanged stories of home over a few bevvies and danced the night away. He said he didn’t dance, so I said, I’ll teach you, knock back that bourbon and let’s go!! He did very well. I’ve no idea what time I got back to the room but Shane says I was still out at 0130. Not a bad effort! 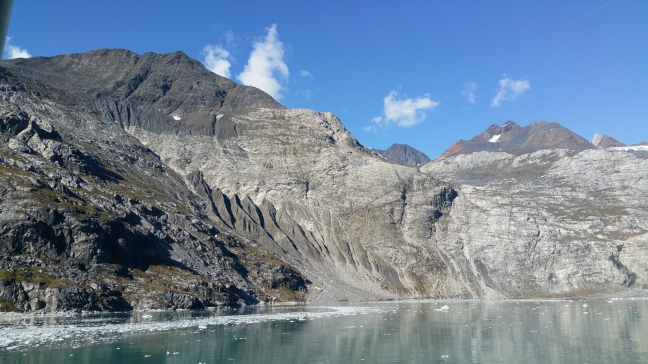 The whole day was clear as a bell and we cruised in and out of Glacier Bay and en route to Skagway. Fantastic scenery and interesting commentary from the rangers on board. We saw a colony of sea lions, the daft things all trying to bask in one small area, howling and barking at each other grumpily. 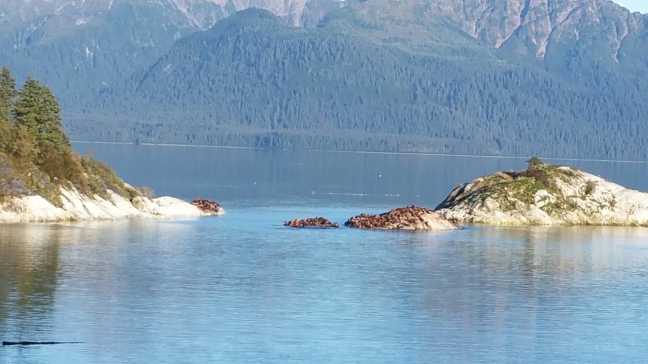 Caught up with the Texans, Earl and Shanna, for lunch, then I left them in Shane’s care, haha, to meet up with Jason for coffee. They gave me a decent ribbing, not that I gave a flying foxtrot!! It’s just nice to have other company sometimes. I did a trip to the medical centre as well, for meds to dry up my stuffy head. You can buy pseudo ephidrine over the counter here, joy of joys!! We all got together again, plus the Aussies, for dinner. Then an early night for this chick.

The major excitement of the day was the Captain waking us at 2230 to tell us the Northern lights were out. I was so stoked. That’s everything I was dead keen to see ticked off. Awesome. It’s so beautiful, surreal, ethereal. Magic.

The ship berthed in Skagway at 0640 this morning. It’s a shore day so many people are off on excursions. We’re going to do our own thing, wander ashore and chillax. I’m feeling pretty rough, blasted cold.

1815: We’ve had a lovely day, pretty lazy with a walk into town, which is very quaint. Old colonial houses beautifully restored, with local crafts, as well as the usual tourist rubbish! I took advantage of a special at the spa, advertised in the ships daily rag, Princess Patter. Full massage and facial. Never had a facial before. It was intensely relaxing, gorgeous.